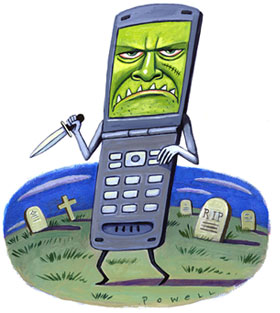 Is technology evil? Are we losing our lifeskills because we are becoming too lazy? As a teacher of technology, this is a concern of mine. I don't want what I teach to be a barrier or a cause for loss of important skills. So what am I supposed to think when people say that because of technology...

"We don't talk to each other anymore."

"We don't look people in the eye anymore. "

"We can't do mental maths anymore."

I feel that some of the arguments are valid, however, I think it's important to put it into perspective.

Take the following quote for example:

“If men learn this, it will implant forgetfulness in their souls; they will cease to exercise memory because they rely on that which is written, calling things to remembrance no longer from within themselves, but by means of external marks. What you have discovered is a recipe not for memory, but for reminder. And it is no true wisdom that you offer your disciples, but only its semblance, for by telling them of many things without teaching them you will make them seem to know much, while for the most part they know nothing, and as men filled, not with wisdom, but with the conceit of wisdom, they will be a burden to their fellows.”

The above quote was by Plato, who was talking about the then increasing habit of writing. Before then, the 1st Century, the act of communicating information by form of writing was not common. Plato saw it as a negative practice, due to the skills that would be lost by not relying on memory, but simply reading. Twenty centuries on, and in spite of the respect we bestow upon the writings of Plato, the above statement has clearly been ignored. Will the same be said about the other things that people feel we are losing?

This Gizmodo blog post, written by George Dvorsky lists the following skills that we are losing:

This Off the grid news blog post by Rich M lists the following:

This is a good list of things that not many of us do do regularly. I don't remember the last time I tracked an animal, made soap, or repaired the gun in my garden shed. More accurately, I have never tracked an animal, never had to kill one. I've never made my own soap, and I don't own a gun (I don't even have a garden shed!). Some of these things do seem to be quite cultural in nature. For example, I can't see myself ever owning a gun, and many people in the UK never will, and never have. I don't eat meat, so will never have to track and kill an animal. In fact there are some cultures that are vegetarian. And lastly, I don't wash, so no need for soap....joke.

I can say, however, that I have done a few of the others, like started a fire without matches (used a lighter, lol), grown my own food (on a small scale), knitted my own collection of snoods (hey, it's a start!), and ridden on the back of a horse.

I do believe that there needs to be a balance. Everything in moderation, as they say. And it's important to keep things in perspective, just like the handwriting vs typing debate in my previous post.

With the advent of every new technology, there is always a push back. Let's not forget the epidemic that was sweeping the nation in the 18th century, and was afflicting the young in droves. What was it? Reading! Just ...reading. Like ... regular books and stuff. A few hundred years on, and we now have an annual World book day.

Balance and perspective. So, I'm going to keep on teaching kids to use technology, and helping other teachers to do the same.

Other Sources not linked within text: